In this #MakingWorkVisible blog, Molly Drummond explores the work that goes on behind so-called 'unskilled' jobs. Find Molly on Twitter @drummolly.

Under the new immigration rules proposed by the British Government, I would not be allowed to live in the United Kingdom if I had not been born here. Nor would my mother or most of my friends or my partner. The reason? We work in industries considered to be "low-skilled” because we earn less than £20,000 a year.

Every year, for International Women’s Day, Engender run a campaign that encourages #MakingWorkVisible. The daily work of women — whether it be caring for children, elderly relatives or other unpaid domestic work — is not considered economically valuable and yet its contributions are vital. When public budgets are cut, women are often forced to leave the workplace to care for those who are not helped by the state. But when women work (and especially working-class women), it’s not surprising that their jobs are often the ones considered unskilled and low-paid. 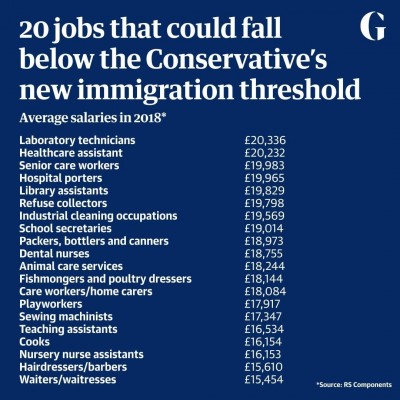 Including library assistants, nurses and refuse collectors, school secretaries, hospital porters and waitresses, the threshold ignores the fact that they’re all necessary parts of society as it currently functions. People from a wide range of social and economic backgrounds make up large swathes of the low-waged workforce, without whom the industries would collapse. These jobs are deemed of less value and conversely those who are working in them are considered less valuable as well.

The care industry is understaffed and underfunded and yet a population living longer creates a demand that is unable to be met, putting pressure on those who are already working incredibly hard. My mother worked as a care assistant in a private care home for five years, looking after residents with dementia, Alzheimer’s disease and other health issues for busy twelve-hour shifts. The work was back-breaking. She would come home at 8:20pm every evening absolutely exhausted. We joked that we had ten minutes to deliver any important information to her before she fell asleep on the couch.

On top of these long shifts, my mum had to complete training modules regularly. Binders filled with SVQ modules and health and safety exercises piled up around our living room. She went to work on days off to attend training sessions and every shift required her to retain and use all of this information whilst interacting kindly with human beings who needed her immediate care. While in the job she saw many staff start who quit when they realised just how much training and labour was involved for so small an hourly wage. 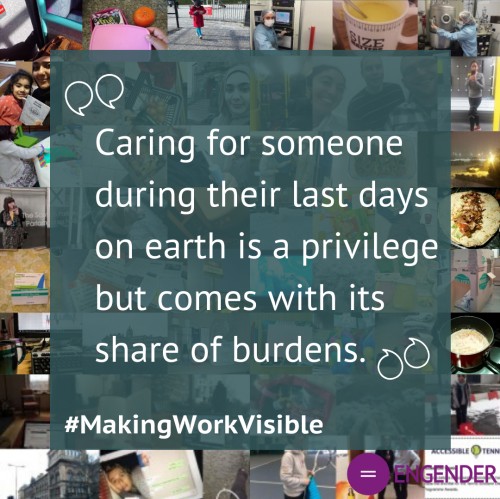 The emotional toll of care is something I can only speak to from the outside. Many care workers and nurses alike have written about the resilience needed when looking after someone sick or dying. I can only write about how I would know when a resident died from the way that my mum seemed quieter for a few days. I can only say that when she eventually left, it was the friendships she had formed with both the residents and her fellow care workers that had kept her in this overworked, low-waged profession for those five years. Caring for someone during their last days on earth is a privilege but comes with its share of burdens.

I work in retail, and I would never claim that my job is as routinely back-breaking or meaningful as care. But I do see some similarities. According to Working Futures, in 2018 66% of retail and sales assistants are women. Interacting with the general public on a daily basis, especially during peak periods such as Christmas or school holidays, can be draining and require a lot of patience. Of course, just as care brings opportunities to help others, there are many moments where I get to recommend and chat about books to lovely people. But the old adage of “the customer is always right” can allow a select few customers to feel entitled to treat retail staff as unimportant, stupid or invisible. This treatment has kept me lying awake at night, frustrated to still be thinking about the person who yelled at me whilst I was doing my job.

In reality, these jobs involve long hours, training programmes and targets to be met — just as with any office role on a high salary. Contracts are often unstable and temporary. Every day could be the day that someone faints in the cafe or kicks off about a refund. There could be a sweet child buying a book or a dog in the shop. The job is varied and that’s part of the fun. But it’s not unskilled — it’s low-waged. 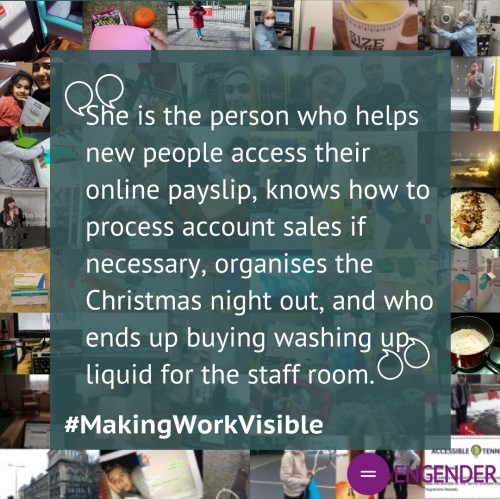 My colleague is paid the same as me despite having worked for the company for thirteen years. She is the person who helps new people access their online payslip, knows how to process account sales if necessary, organises the Christmas night out, and who ends up buying washing up liquid for the staff room. Whenever someone can’t do something, she helps, thanks to her years of experience and empathy. She picks up the slack because she can whilst others expect it of her, conducting that invisible yet vital work.

In A Language of Kindness, Christie Watson, a former NHS nurse, suggests that junior doctors should complete a month of nursing during their training to fully understand the strain of their job. This, she says, would guarantee that the nurses would never have to clean an abandoned coffee cup in the sink ever again. The campaign #MakingWorkVisible offers the chance to walk in a woman’s shoes — through childcare and chores, care and customer service, emotional labour and multi-tasking — and thereby encouraging empathy for the varied lives we lead. It is important to consider both the invisible work that is not in job descriptions and those who often end up doing it by default, to be of value.