In this #MakingWorkVisible blog, Dr Ariane Critchley explores how including the voices of service users in policy, research and design, can actually result in more unpaid and invisible work. Find Ariane on Twitter at @arianecritchley. 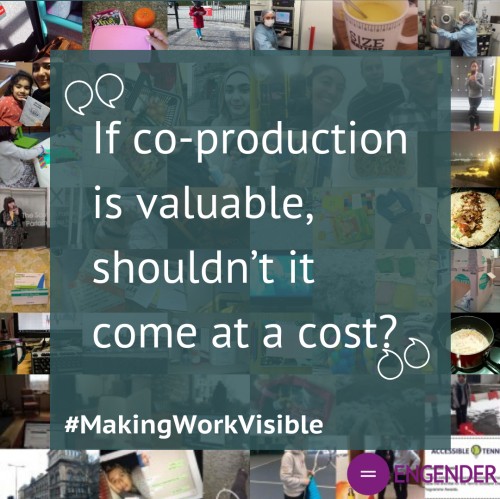 Co-production, service user involvement (SUI), carer ‘voice’, and ‘lived experience’ have become buzzwords of policy and education in the field of social work, health and social care. In Scotland, the report of the Christie Commission (2011) identified key priorities for ‘the future delivery of public services’. The tension at the heart of co-production is nestled between the two priorities listed first:

These priorities contain a commitment to the co-production of services, and simultaneously to the maximisation of ‘scarce resources’. But if co-production is valuable, shouldn’t it come at a cost?

Co-production is subject to many definitions. The New Economics Foundation’s definition is popular, and cited by the Scottish Co-Production Network:

‘Co-production means delivering public services in an equal and reciprocal relationship between professionals, people using services, their families and their neighbours. Where activities are co-produced in this way, both services and neighbourhoods become far more effective agents of change’ (Boyle and Harris, 2009)

At its simplest, co-production consistently involves people who uses services in their design and delivery in meaningful ways. The importance of this value is not to be under-estimated, nor the history of the struggle of the disability movement towards the goal of ‘nothing about us, without us’. Previously, I have written positively about the development of community and neighbourhood-led independent initiatives in social care. These can be particularly important in remote and rural locations in order that individuals and families can remain in their homes with good quality, flexible care and support. Yet the work that goes into co-production of services is often under-recognised. The focus on evaluating the success of co-produced services is frequently on the efficiencies and cost savings made, rather than as McMillan asks,

‘whether participation leads to empowerment and improved health and wellbeing of PWUS [people who use services] relatives, carers and the wider public’ (McMillan, 2019)

The contribution of unpaid carers has highly gendered dimensions. As Engender have previously described,

‘care continues to be a profoundly gendered issue, resounding along women’s lives in Scotland. Women take on the major share of responsibility for caring as either unpaid or paid carers, caring formally or informally’ (Engender, 2017) 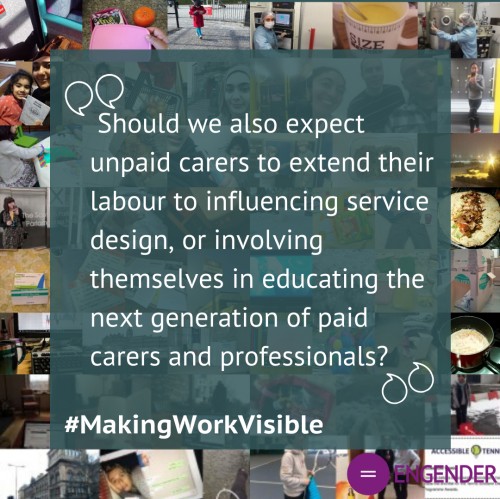 Women are over-represented as both unpaid and paid carers. Like many women, I have experience of both roles, and whilst the joy and satisfaction of providing good care are real, so are the demands and the stresses. The ALLIANCE and SDSS (Self-Directed Support Scotland) recently reported on themes from their ‘My Support, My Choice’ research data, specifically in relation to unpaid women carers. That the report was entitled, ‘I could have run away’ communicates so much of the overwhelming nature of the role. The research found that despite the promise of self-directed support (SDS), it has the potential to add to the burden of unpaid carers in significant ways. Should we also expect unpaid carers to extend their labour to influencing service design, or involving themselves in educating the next generation of paid carers and professionals?

The current enthusiasm for co-production in social work and related professional areas certainly extends to education. The active involvement of people with life story experience in the training of future professionals has become the standard. Many of us who work in higher education have embraced the opportunity to involve service users and carers in a range of educational activities; from occasional contributions to lectures to developing modules, educational materials and professional programmes. These activities are co-ordinated and formalised in different ways across institutions, with Stirling’s Unity group, formed in 2005 providing a strong example in Scotland, as showcased in 2018 by Iriss. Yet as Sapouna (2020) has recently asked, in the higher education sector, is there a danger that service user narratives become commodified? Writing about the ways that experience of mental health difficulties and their treatment are included in the education of future social workers in Ireland, Sapouna considers her own practice and suggests that,

‘while we keep honouring personal narratives, we stay alert to the nuanced relationship between these narratives and the power operations in the context where they are shared and heard’ (Sapouna, 2020) 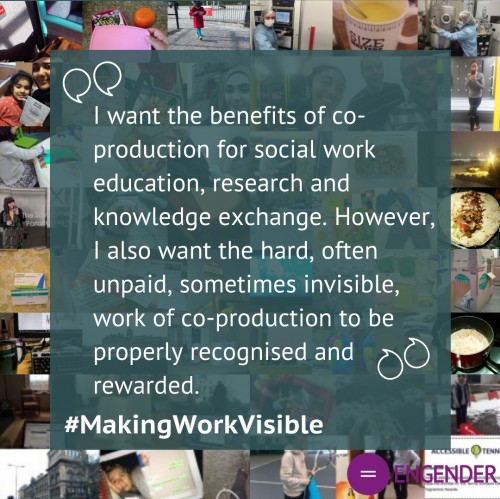 Over the past year, I have been involved with a knowledge exchange project that has harnessed the work of a woman who has experience of child protection involvement with her family, and having overcome significant difficulties, has become a speaker and advocate for the needs of parents. She has had a pivotal role in the project, along with 5 other women, all of us working in social work practice or academic roles. I am proud of the work we have done to amplify the ‘voice’ of people with direct experience of child welfare involvement. It is vital that we understand how it feels to be a ‘vulnerable mother’ whose child is considered at risk within the family. I am less proud of the differentials in how our different forms of work are recognised, and of my limited capacity to change this.

There are no easy answers in this debate for those of us who want to see system change, and who want professionals in social work, health, and social care to be trained to focus on the needs of service users and carers. I want the benefits of co-production in the services and support available to me, my family, and my community. I want the benefits of co-production for social work education, research and knowledge exchange. However, I also want the hard, often unpaid, sometimes invisible, work of co-production to be properly recognised and rewarded.