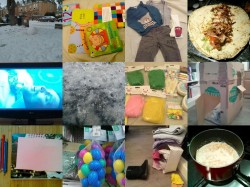 Angie* is mother to a 19 month old son and is currently job hunting. She wants to create visibility for all of the unseen work that caring for a child involves.

*The photographer wished to remain anonymous, so this is not her real name.

Find out about her day below. 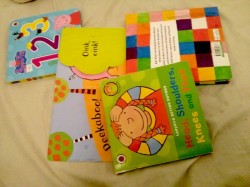 The toddler and the cat wake me up.

After a first nappy change I grab a coffee and a banana cookie for the wee man and we read some books in bed and play a little while. 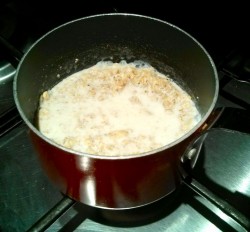 I prepare breakfast, our usual banana porridge and the toddler and I eat in the kitchen.

The toddler sits in the highchair and gets a book to play with while I cook.
The cat is hungry too, so I feed him.

I quickly put the dishes in the sink. 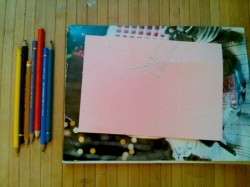 Time to get ready and dressed. First myself, which means: entertain the toddler at the same time. Today by giving him some paper and pencils. He soon gets bored and so the pencils get thrown on the floor, where I need to pick them up before he decides to paint the walls.
While getting dressed myself, I also have to stop him from:

- climbing up the window sill
- going into the living room where daddy fell asleep on the couch (as per usual). 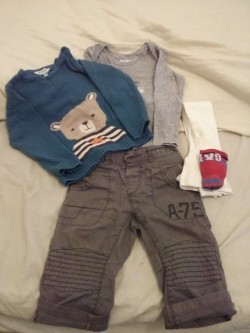 Toddler lets me dress him in one go: how unusual!

Trying to find out if places are open again after the weather warning, such as libraries, soft play etc.

Preparing the carrier for the day as our buggy is of no use in this snow. Remember to pack nappies, snacks, gloves… 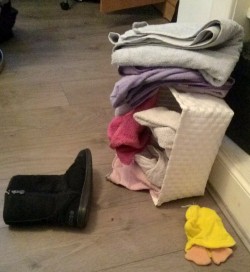 We are finally ready to leave the house, putting on the jacket and wellies was more difficult than expected. The toddler ran away a couple of times and managed to empty a shelf full of towels and nappies.

I quickly score some cardboard boxes from the supermarket across the road for afternoon activities.

Now the toddler and I are finally off to the library. 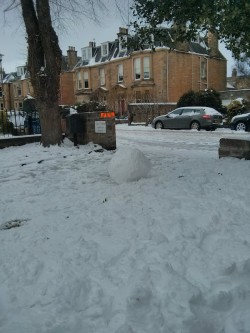 The library is closed after all. At least we had some fresh air.

We walk back home as there doesn't seem to be anything else open yet.

We quickly stop at the supermarket and get a snack for the way home. 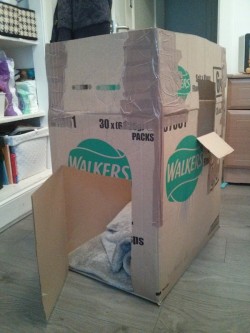 With the cardboard from earlier I start to build a house for the toddler to keep him entertained for the rest of the day. While I try to tape it all together the cat and him climb in and out of the box. Another nappy change. Playing with the cat.

For lunch we have leftovers, so at least no cooking for me. However, the toddler throws his food on the floor. Maybe he doesn't like it today? I try toast, which he also ignores. I clean up the food from the floor and make him a bottle instead. Daddy wakes up and I have to tidy away his laptop so that the toddler cant play with it. Let the cat out.
I give the toddler some cuddles with his bottle, but he refuses to nap. Maybe it is his final back teeth that are bothering him.

I send a message about a monthly playgroup I organise and work some more on the cardboard house while the toddler plays with daddy and his guitar. I am adding some openings to the house where building blocks fit through. The toddler joins me and starts to find out where which shape goes.

The cardboard house finished, sort of… I wanted to decorate it but the door was already pulled out, so I figure it won't last very long.
Daddy buys the toddler a second hand (real) guitar from money we don't have. 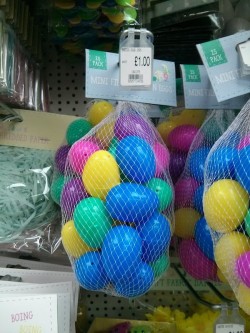 After another unsuccessful attempt to put the toddler down for a nap I decide to go shopping.
First I tidy up some toys and then we need to get dressed again. The toddler prefers to play with water in the sink. I watch him to make sure he doesn't flood the bathroom, while his dad plays guitar.
Time to get dressed again with all those winter layers. The toddler is not impressed and wants to read books. I give in.

We are finally leaving the house.

At the supermarket I put the toddler in a trolley so my strained shoulders get a rest from carrying him. He sees all the yummy stuff and keeps wanting to eat something. I buy him two pouches to keep him entertained in the next shop. 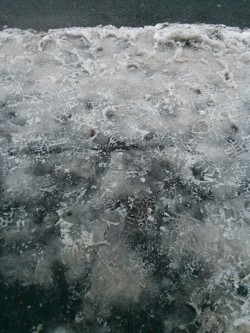 After coming out of the second shop the toddler refuses to get back into the carrier. He wants to run around instead, which is understandable, but I am tired and just want to get back home. Eventually I manage to get him in there somehow. A female stranger helps me to put the backpack on.

We are waiting for the bus that takes us home from the shops.

I am quite happy with the arts & crafts material I found at the shop.When we get back home I start tidying up some toys, dishes, clothes and books so it is possible to walk around without stepping on things. 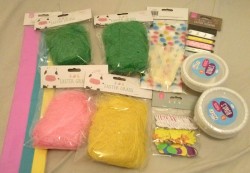 I do the dishes with the baby in the high chair. I put on some children's programme to keep him entertained but he is so tired by now that he falls asleep in high chair. That never happened before. I put him in his cot.

I change another nappy and try to see if baby can be kept awake up again to avoid him being up all night. No chance!

Daddy goes to his second job.
The baby is back asleep and I do some more work for the playgroup I organise.
The baby wakes up couple of times, but goes straight back to sleep when I go through. 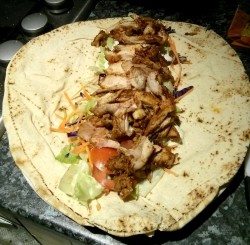 I prepare some dinner: Homemade Shawarma.
I tidy up some more toys in the living room.

I eat and watch TV. Finally a little break.
The baby is waking up again once or twice.

I tidy up the kitchen after cooking.
I start looking for jobs online. 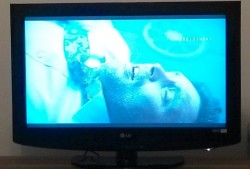 Enough job hunting. I start watching TV and put my feet up for a bit.
Daddy returns from work.

The toddler wakes up again! Apparently this was 'only' a late nap. We play a bit more with the cardboard house and read books.

The toddler is ready to go back to bed. I fall asleep with him. He still wakes a couple of more times during the night. I do all the night shifts. His dad stays up late and watches TV. Tomorrow we do it all over again. I will get up early...
77
b
Read more stories
« Later entryEarlier entry »