In this #MakingWorkVisible blog, Ailsa Clarke reveals the varied and unsung work which goes into caring for her son. You can find Ailsa on Twitter @ails_clarke. 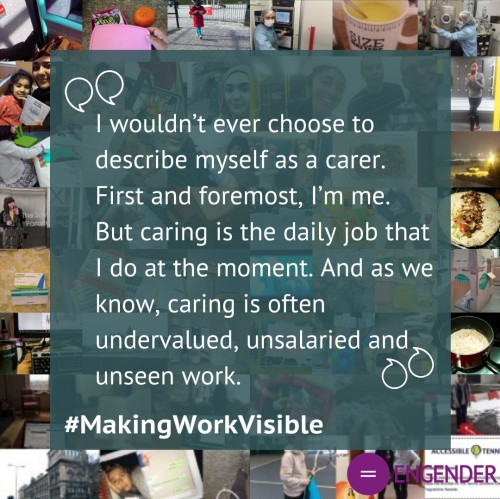 I wouldn’t ever choose to describe myself as a carer. First and foremost, I’m me. And ‘me’ is split into several people: teacher, friend, wife, daughter and mum to one son who happens to be disabled. I’m a tutor; a public speaker; a living historian; a writer (of sorts); a maker of jelly and custard for a hungry seven year old; a payer of gas bills that have sat staring balefully at me for a couple of weeks before I got around to sorting them; the family chauffeur; someone who once left her husband and son to fly to Serbia for not quite 48 hours, dressed as one of the first female ambulance drivers, to take part in a First World War commemoration. But caring is the daily job that I do at the moment. And as we know, caring is often undervalued, unsalaried and unseen work.

When we adopted kiddo, he was a baby. We knew he had been exposed to drugs in utero and had suffered extreme withdrawal after birth. All indications were, however, that he was progressing nicely and that any developmental delays were mild.

Seven years later, the extent of his neurological damage is much clearer – although it isn’t the heroin that’s done it. It’s exposure to alcohol in utero. Kiddo has FASD. Nope, me neither. Not until I started investigating what might be wrong. Foetal Alcohol Spectrum Disorder is a brain-based disability which can affect every area of brain function. In our son, this manifests as hyperactivity; impulsiveness; an inability to link cause and effect or learn from consequences; sensory seeking behaviour; hyperacusis; distress over change and transitions; extreme anxiety; emotional meltdowns and a total and utter inability to sleep, despite all the medication that CAMHS (Child and Adolescent Mental Health Services) throws his way. (Yes, we have tried weighted blankets, a consistent bedtime routine, lying beside him, meditation apps, white noise…and probably everything else that any well-meaning person might suggest. I’ve now perfected the art of smiling and nodding to conceal homicidal thoughts). He has also been diagnosed with Autistic Spectrum Disorder and ADHD. For the record, he’s hilarious, loving, outgoing, polite, kind and has a real desire to be helpful – it’s not all grim. But given that the childminder was one three-year-old tantrum away from a nervous breakdown and he had to have his own risk assessment at nursery, me continuing to teach English became unviable four years ago. So, here I am. ‘Caring.’

The day is bookended with medication. ADHD medication before breakfast – sometimes I have to wake him but more often than not, sleep hasn’t really happened and he’s already hollering and bouncing off the walls. We now know that it takes a good hour to have an effect, so on a school day, it’s a 6.30am start. Sleep meds and growth hormone injections close play for the day.

His morning routine is on a visual timetable and needs to be the same every day: although he enjoys school, it causes him a lot of anxiety, and this manifests in his behaviour. So, breakfast is eaten standing on a step in the kitchen because sitting on a chair and eating at a table is too much of a temptation to be daft. Toilet visits are supervised as there’s nothing he likes more than to stick his head into the toilet bowl to watch the flush. I wash dishes while he eats (or often, doesn’t eat), I load washing, drink lukewarm coffee and prompt / feed when necessary. There’s regular ‘top ups’ of cuddles to keep anxiety at bay, sometimes a reappearance of breakfast (kiddo has always been and ever will be one of life’s casual vomiters), uniform on, teeth and hair done, shoes on and out the door.

A school day starts with a Costa visit for the toilet (him) and caffeine (me). Often, we do his homework there before school as the school day takes it out of him and he’s flagging by the afternoon. Maths is his favourite; reading is something to be avoided if possible.

The focus of afternoons and evenings are keeping him quiet and allowing him to decompress. Tears, anxiety and emotional meltdowns happen frequently after school because concentrating and emotionally regulating is pretty exhausting when you’re seven, you have brain damage and the environment is overwhelming to your senses.

Often, days are punctuated by hospital appointments or CAMHS visits. There are medication reviews and changes which necessitate gradually reducing one medication before trying another – and then there’s the rollercoaster of side effects, disruptions to sleep, suppression of appetite and alterations to mood. For him, there’s riding out the effects of those strong medications on what is a very wee body. For me, there’s memorising new medicines and dosages, so that I can liaise with GP, pharmacist and different consultants. There has been, variously, ultrasounds, facial photography, many blood tests, ECG tests for heart function, EEG tests for brain function, the insertion of nasal-gastric tubes, cannulas, hospital admissions. Kiddo is a consummate professional when dealing with people in the NHS– I can’t think of anyone else who, still boaking, would actually thank two nurses for shoving a tube up his nose, down his gullet and into his stomach. 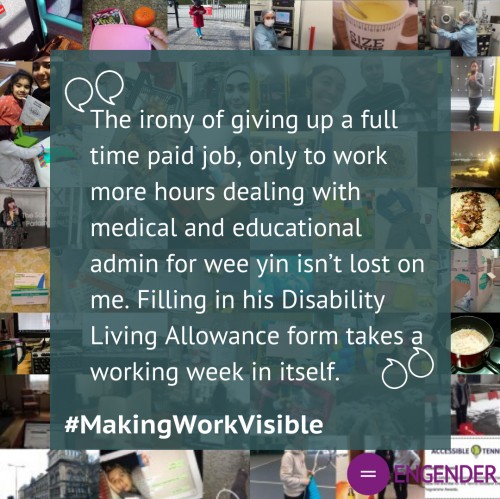 For school, there’s Child Planning Meetings, IEPs to be looked over, Coordinated Support Plans to be…well…coordinated, meetings with Occupational Therapist, Speech and Language Therapists, Additional Support for Learning Staff, chats with the Educational Psychologist. There are endless emails to send to school passing on information about changes to medication, to mood, events that might have unsettled him.

The irony of giving up a full time paid job, only to work more hours dealing with medical and educational admin for wee yin isn’t lost on me. Filling in his Disability Living Allowance form takes a working week in itself (and I’m only partly joking when I say that I need both my university degrees to navigate the intricacies of it. It would be so much easier if I could just tick a box which reads ‘Yes, he still has permanent brain damage.’).

So…I’m a carer. There are connotations connected to this word, this job title, if you will. There are assumptions too. Some of them are pretty negative. Low pay. Low level of education. A poor bet for being granted a mortgage. And yet, being a carer is, if only in my own narrow window of experience, something that calls for skills which are often hugely diverse. The ability to fill in endless forms in an articulate manner. The ability to talk the language of doctors and educators. The ability to advocate relentlessly for people who can’t advocate for themselves. Endless reserves of patience, empathy, energy, resilience, positivity. And, in our house, the ability to survive on three hours of sleep a night and still make a mean jelly and custard the following day.