a day in the life of emma, chief executive of Engender 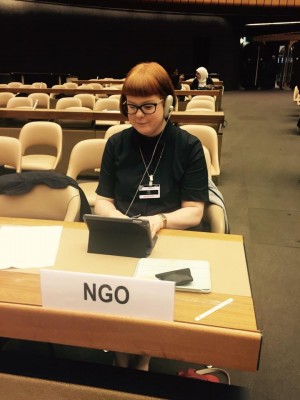 6.20 after snoozing my alarm exactly twice. Often bits of the Today programme get integrated into my early morning dreams. (I had to switch from Good Morning Scotland after I woke up convinced that my then boss was standing at the end of my bed talking to me about the labour market.)

Look at social media and emails, especially the news roundups and various briefings that have come in during the night, and any messages from my folks in New Zealand. I read the papers over breakfast (boiled egg and toast, usually, along with the first of many cups of tea), and listen to the radio news. My partner is the least morning person I have ever met, so I try and kick-start his day by bringing him coffee and a breakfast bar in bed.

My day will consist of...

First, I'm heading to the Engender office in Edinburgh. I live in Glasgow, so Edinburgh days involve the subway and the train from Queen Street. Some people hate commuting, but I quite like it. I get a lot of emailing and planning done on the train to work, and books read on the way home. Today, I'm reading the Official Report of the International Women's Day debate in the Scottish Parliament, and triaging meeting invitations that have landed in my inbox.

Today's exciting, because our new Comms and Administrative Assistant is starting. She'll mainly work with our Comms & Engagement Manager, but she'll be responsible for managing my diary so we'll be working closely together.

In the office, I catch up with the team and find out how everyone's doing and if any pieces of work need urgent discussion. We're a small team, and everyone's very smart and good at problem-solving, but there's always ideas and thoughts to bounce off each other and updates to share. We're all out and about so much that we use Slack to share snippets of information, as well as emails and phone calls.

My first external meeting of the day is at 11am, so I get the bus down to the Scottish Government's office at Victoria Quay, just missing my new colleague who is arriving as I'm leaving. Scottish Government is bringing together leaders from equalities organisations to test out their thinking on the Government's own priorities for action on equality. It's a nice opportunity to catch up with some colleagues from different organisations, as well as feed back some of Engender's thinking about what the Government should focus on. I have absolutely no sense of direction, so even though I've been to VQ hundreds of times, I'm tracking the bus's progress on my phone.

At 1.30pm I need to be back near my office for a meeting I'm chairing on the National Performance Framework. The NPF is the Government's own scorecard on how it's doing, and they're currently consulting on what it should include. Obviously, Engender wants to see women's equality in a prominent place in the NPF, and we've convened this meeting of gender equality organisations to strategise abour our asks. It's an absolute privilege to work with smart, funny, insightful, and committed women's sector colleagues.

After the meeting I need to scoot back to Glasgow. There's a solidarity protest with the #Repealthe8th strike in Ireland. Engender has worked with other women's and human rights organisations to make the case for better access to abortion healthcare in Scotland. We unequivocally support the women and men in Ireland calling for the consitutional ban on abortion to be lifted.

I don't have any children or other caring responsibilities, but channel a lot of love towards my friends (of course) and also the women's organisations I volunteer time with. I sit on the board of three women's organisations, and throughout the day I'll be responding to emails about them, supporting their senior leaders where I can, and advocating for their work and ideas.

Other things I'll do in the day are...

Spend far too much time poking at Twitter; tackling the dreaded ironing pile in front of an episode of The West Wing; buying groceries for the partner to cook with; putting on a load of washing for the partner to hang up; keeping (sometimes inadequate) track of the levels of loo roll, shampoo, washing capsules and other household essentials; shuffling things around in my to-do list; writing a card for my aunt who has been ill; trying to figure out when I can call my parents this week based on our schedules and the time difference.

Checking the weather and my calendar, and then picking out my clothes for tomorrow. And one final, final, final look at Twitter.