In this #MakingWorkVisible blog, author JW reflects on how a change of work interacts with a change of country, and domestic double standards.

I was a journalist and then in PR in one of the most crowded cities in the world. Aside from my full-time jobs, I made some amateur films, wrote short stories and won two small awards. After my partner landed a job in Scotland, we moved here. By then I had decided to go professional with my old hobbies. I did an MA in film directing and started working as a freelance writer and filmmaker. After we ran away from the pollution and extreme crowds in China, my career prospect was reduced to a job-starter in a new market with a new language. Getting into the deep water of a mature adulthood, various threads grew and stitched into a complicated web of life. 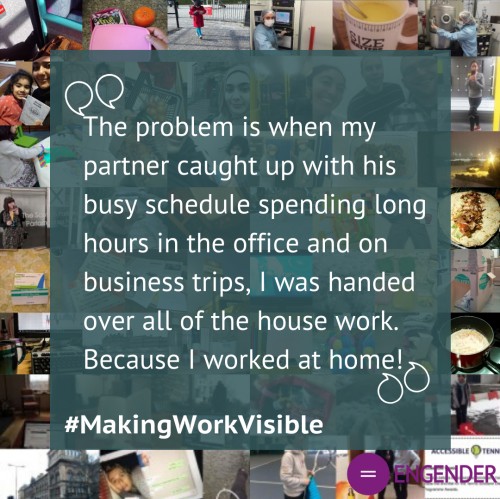 I worked at home, in my bright living room with my plants and paintings bought from local art galleries. A neighbour’s cat frequented my garden and kept me company when there was no one else in the house. It started out as a romantic thing to work at home. How can you resist drinking morning coffee from your favourite mug and working in any corner you like in your own house? The problem is when my partner, caught up with his busy schedule spending long hours in the office and on business trips, I was handed over all of the house work. Because I worked at home!

The housework was a bit different nowadays compared to before. In China, I lived on a very busy street filled with cafes and restaurants offering a wide range of meal choices. I ordered groceries online and they were delivered to the door. The off-line shopping was mostly recreational.The housework was limited to twice-a-week laundry and cleaning. In the office, there was a lady preparing and delivering fresh fruits and yogurt to our desks. In Scotland, I dined out twice a week and cooked the rest of the meals by myself. I walked to supermarkets for groceries. Sometimes I needed to walk far to have more variety in my shopping cart. I weeded the garden with my hands. I still needed to do laundry, vacuum the floor and wipe the surfaces of furniture. I once used a tracker to record all the time I spent on domestic chores and it was on average three and a half hours per day. 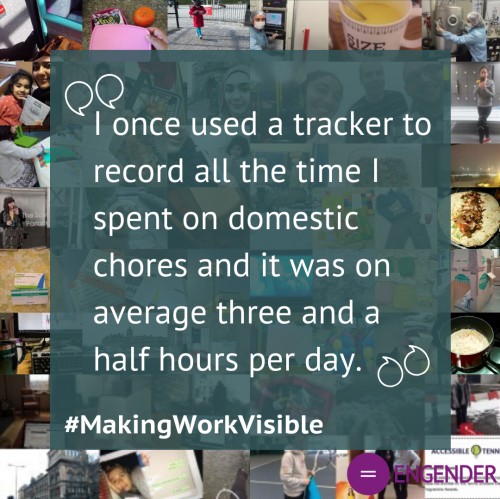 Last year, when I got a few projects within a very tight time frame, I had to work long hours for an extended period. Our house quickly turned into a mess. My partner had more tolerance of mess than me and didn’t do anything about it. I managed to do quite a bit housework but became increasingly resentful. We fought over it and my partner eventually agreed to take more housework. He did things slowly but with great care, and for that I was very grateful.

In the throwback to our old days in China, he wasn’t always neglecting his domestic duties like nowadays. When I had my full time job and he happened to have a few months break between two jobs, he used to tidy up the apartment while I was away working. So the explanation seemed to be that I was doing more housework than him in Scotland because I now earned less than him. I wasn’t just a writer and filmmaker. To compensate my reduced income, I was also a house maid and sex worker and I landed these jobs because of my sexuality. My invisible payslip contributed to the rent and utility bills. The trade was legal because I was in a relationship. If the relationship broke up, I would have to find new clients for my service.

Good luck to me!